Someone once decided that for the majority of humanity, aliens are only allowed to exist at the microbe level. On the grounds that the presence of aliens more technologically advanced than us would cause panic. This argument is half-hearted, however, because, from a higher perspective, concealing the existence of aliens is understandable but not a long-term solution. First, technological advances already allow cameras to detect alien bases on the Moon. If one were to take the trouble to observe the Moon for a longer period of time, one would certainly spot their spacecraft flying into view from time to time. 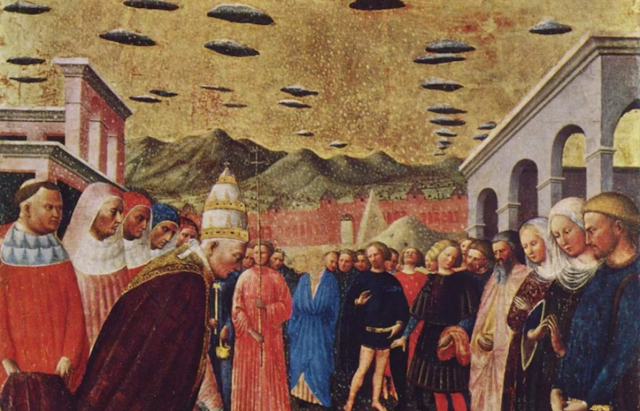 The panic doesn't make much sense either, given that we know of paintings, frescoes and woodcuts from the Middle Ages that clearly show alien spaceships. Logically, if their intentions were hostile as we understand it, they would have shot down our satellites the moment they were launched. One argument of the doubters is that if the aliens existed, we would have picked up their radio signals long ago. But already in Arvisura, I found information that there was an age here on Earth when interplanetary communication was accomplished with thoughts. And this is easily explained by the holographic worldview. So it can be said that the reason we are not receiving radio signals is because aliens use a different technique.

Why this strange fear? I've come to believe that it's a signal from the net of humanity's consciousness, what many people call a first thought. Because if you remember the history of humanity and the world we live in today, you might even get the idea that maybe they have more reason to fear us than the other way around. When you read this and you might have the thought of me that 'this is stupid', it is quite specifically such a sign that you can only override with your mind. Let's say you read my web pages and you wonder how you, who know very little about them, can say that I am stupid, who has been doing nothing but this sort of thing for 20 years. When some people claim that aliens have nothing to do with esotericism, they are half-truths. But half-truths are characterised by the fact that if you know one half of the truth, it is up to you to uncover the other half.

When you are born and form an opinion about the world, you are forced to accept the opinions of others, and this is reinforced by schools. Once they are fixed, it is very difficult to change your mind. Your place in the world is also determined by these two things: what you know and believe about the world. But the rational hemisphere of the earthly man is capable of shaking his other hemisphere, his beliefs, in the face of evidence. I can only give you circumstantial evidence here that you can investigate if you are really interested. Just click on any of the images here and you can start your journey, which is surrounded by strong doubts, especially at the beginning. The stakes are. There is a narrow segment of humanity who know for a fact that there are two intelligent species living on Mars beneath the surface. They are the first speed of humanity. If they are hiding this from you, what is their purpose for not asking your opinion? You belong to the other speed until your eyes open.